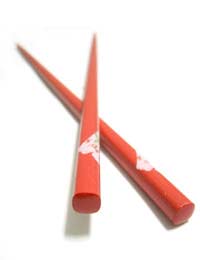 If you've ever struggled to use chopsticks in a Chinese restaurant, or wondered why everyone doesn't just use knives and forks, then this is for you!

Chopsticks, in their first incarnation, were used in China some 5,000 years ago when people used twigs to take food out of the large pot in which it would be cooking.

Cutting food into small pieces before cooking - thus speeding up the cooking time and saving fuel - eliminated the need for knives while eating, as the twigs that were used during cooking could be used for eating with as well.

Chinese chopsticks are typically made from bamboo. Bamboo grows freely across the country, and its resistance to heat makes it an attractive choice. Wood and bone have also been used while the wealthy may choose precious metals for their eating utensils.

Silver was a popular choice for the rich at one time as it was thought that should the food be poisoned, intentionally or otherwise, silver chopsticks would go black. This has now been shown to be untrue although the hydrogen sulphide released from rotten eggs might cause a discolouration of silver chopsticks.

Some chopsticks are highly and artistically decorated with calligraphy or elaborately carved.

You'll find chopsticks in other parts of the Asian continent but these are the most familiar.

Chinese chopsticks are known as Kuai-Zi or 'quick little fellows'! They are usually about 10" long with blunt ends.

Japanese chopsticks are typically smaller, about 7-8" long, and taper to a point. Originally chopsticks in Japan were used for religious ceremonies rather than everyday eating.

Most of the rules of dining etiquette and good manners apply equally when eating with chopsticks but there are some specific rules as well. These may vary in different parts of Asia so if you're visiting a country, our advice is to watch and respect how others behave.

How to Use Chopsticks