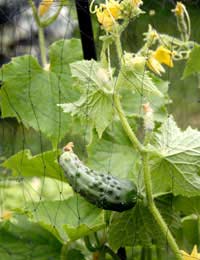 Pickling food, as a method of preservation, is an old tradition in China. After harvest, vegetables that weren't eaten immediately were salted and pickled to ensure a good supply throughout the following year.

A wide range of tastes are catered for by pickling, which like other food preparation methods, varies from area to area, and the pickles may be hot, salty, sour or sweet. In Szechuan especially, hot spicy pickled vegetables are still a favourite and are likely to be eaten for breakfast with a bowl of bland rice.

One of the most famous Chinese pickles is Zha Cai, which literally means pressed vegetable. Mustard tubers are dehydrated and brined before being pickled in a hot spicy mixture. Zha Cai is available from Chinese grocers or specialist shops.

If properly bottled, pickled vegetables will keep for months, but most of our recipes will result in pickles that are intended to be eaten within a few days. The method used for these is more about instilling flavour than preserving. Rice vinegar is milder than malt vinegar. Balsamic vinegar can be used in its place if it's unavailable.

Peel the cucumbers. Chop into 2" lengths and then quarter lengthways so you have sticks. Put in a colander and sprinkle with salt. Leave to stand for 30 minutes to allow excess liquid to drain from the cucumber.

Meanwhile mix together the ginger, vinegar and sugar. Rinse and drain the cucumber, and pat dry with kitchen towel, before adding to the vinegar mixture. Stir to make sure all the cucumber is coated. Chill before serving.As an alternative, add chopped chilli or garlic.

Place the mooli in a colander and sprinkle with salt. Leave to stand for 30 minutes to allow excess liquid to drain. Drain, rinse and drain again before patting dry with kitchen towel.

Place mooli in a bowl with the vinegar, pepper and oil. Cover and refrigerate over-night.

Prepare all the vegetables, cutting into strips of roughly the same size - or not! Put the vegetables in a jar and pour over the vinegar mixture.

Allow to stand for a day or two before using.

Thousands of years ago in China and throughout Asia, fish was being salted and preserved. The liquids that were leeched from the fish were used as a condiment much as we would use salt and pepper. In the sixth century, when Buddhism took hold in China, its vegetarian regime led to the development of a soy-based flavouring that today we know as soy sauce.

Pickling eggs by salting them in brine was the Chinese answer to the problem of transporting these delicate goods. The famous 1,000-year-old eggs are prepared in a mixture of salt, ash, lye and tea. They take about 100 days to make and will last for another 100 days - although the yolk might be a bit green then!