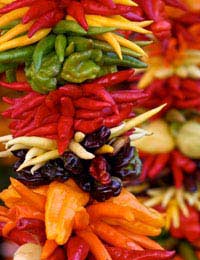 “It’s more pleasurable than going for a long run.” Now you may be able to think of lots of things that are more pleasurable but the speaker was talking about eating chilli! And now we’ve got the science to back the statement up.

The fiery burning sensation you experience in your mouth when you eat chillies is caused by capsaicin; it might hurt initially but this chemical also causes the brain to produce endorphins natural painkillers that result in a feeling of well-being similar to that experienced by athletes.Chillies are rich in vitamins A and C, and as well as being used as painkillers, they’ve been recommended for lowering cholesterol and boosting the immune system.

Chillies have been around for a very long time. They originated in Central and South America and archaeological evidence shows they were in use as long ago as 6000 BC. After Colombus’s voyages to the New World, chillies were introduced to Spain and beyond. These days are cultivated all over the world with the largest commercial producer being India.

Chillies come in a huge variety of size and heat, from tiny bird’s eye chillies to large bell peppers.

In China, chilli is particularly popular with cooks in Szechwan and Hunan. Chilli oil (made by heating chillies in oil) and chilli paste (made from fermented fava beans, red chillies and garlic) are staples of the kitchen.

Chilli is one of the major spices used in Indian food. Maharashtra boasts some of the spiciest food served in India, and Kolhapur’s mirchi or chilli is renowned.But it’s in Thai food that chilli really rules. Used in almost every Thai dish it gives the food its distinctive kick. One of the most famous ingredients is the small chilli, known as prik kee noo, literally 'mouse dropping chilli'. But don’t be put off if you or your family aren’t keen on hot food: if you’re making Thai food, you can adjust the spiciness to suit yourself.Why is an ingredient that makes the diner sweat so popular in hot countries? Because as the sweat evaporates the body cools down.

To Use Fresh Chilli

Wash your hands thoroughly after touching chillies and don’t rub your eyes or mouth for some time after handling them as it will sting!

Chilli plants are very easy to grow at home. They can be grown like tomatoes in pots or grow-bags, and can survive winter under glass. Some make good ornamental house-plants – and you can still eat the chillies. They do crop well and the chillies can be frozen whole and defrosted as required for Thai, Indian or Chinese food - or anything else.

Taste food for heat as you go along. If it’s too hot, try adding a potato as it will absorb some of the chilli – and you can remove the potato before serving. Alternatively add yoghurt to cool down a sauce.

If it’s too late and you’re serving it before you realise its potency, try chewing on a crust of bread as you eat or drink some milk. But don’t drink water: it won’t help!