Home > Basic Ingredients > The History And Uses Of Ginger

The History And Uses Of Ginger 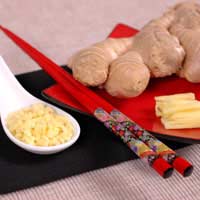 ‘An aromatic of Paradise.’ Mm doesn’t that sound wonderful? That’s how ginger is described in the Koran. Strangely enough though, in spite of such lavish praise, ginger plays only a small part in Middle Eastern cooking; it’s in the cookery of the Asia that it comes to the forefront. But maybe that’s not so surprising as ginger is a native of south-eastern Asia. As well as the Koran, it’s mentioned in ancient writings from China and India, where its culinary and medicinal properties are highly prized. Its original Sanskrit name meant ‘horn root’, a reflection of its appearance; the word ginger comes from the Middle English word, gingivere.

First imported at great expense by the Romans from China two thousand years ago, ginger became popular around the Mediterranean countries. Spanish explorers took it with them on their travels across the Atlantic and today Jamaica is one of the top producers and exporters of ginger.

The Medicinal Use Of Ginger

Ginger has always been an important spice not only for cooking but for medicinal purposes. In Asian medicine it’s been used as a treatment for many ailments including colds and shortness of breath. While these claims haven’t been tested fully yet it has been scientifically proven that ginger is very effective as a remedy for motion sickness and upset stomachs.

How Ginger Is Used

Should You Use Ginger Fresh Or Dry?

Both the fresh and dried forms are available in the UK. The dried spice is mostly used for baking purposes e.g. for ginger biscuits or gingerbread. (Incidentally it’s said that Elizabeth I was responsible for the invention of the gingerbread man.) The taste of the dried spice is very different from that of freshly grated root ginger, which is altogether fresher and more lemony.Although it’s known commonly as root ginger, what we buy in the shops isn’t actually the root of the plant, even though it grows and spreads underground. Botanically speaking the knobbly-shaped object we buy is a rhizome.

How To Buy and Prepare Ginger

When buying root ginger, choose a firm, smooth-skinned rhizome. If it’s got any sign of mould, leave it in the shop.

To use it, you must first peel the root ginger with a parer, removing all the tough outer skin. Then grate or slice as required by your recipe. You’ll find that the flavour the dish will acquire from the root ginger will depend on when it’s added. The longer it’s cooked, the greater its pungency.