Home > Basic Ingredients > Pepper and Its Use in Asian Cookery

Pepper and Its Use in Asian Cookery 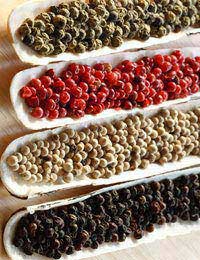 Pepper has always been regarded as the king of spices. Highly treasured and a precious commodity it was used in the past for trading exchanged like money. Native to South India, it’s been exported for 4,000 years, although its cost put it out of reach of ordinary people, with only the wealthy being able to afford to use it.

Today, readily available and cheap to buy, it remains the king of spices and accounts for one-fifth of the world’s spice trade, Vietnam being the largest exporter.

Pepper As A Medicine

Like many eastern spices, pepper was used both for seasoning and medicine. In 5th century India pepper was prescribed for, amongst other ailments, constipation, earache, sunburn and gangrene.

Pepper gets its spicy heat from a chemical compound called piperine. It has about one-hundredth of the heat in capsaicin found in chillies. Sniffing pepper is said to cause a person to sneeze although this has never been scientifically proven.

The Varieties Of Pepper

Peppercorns are the fruit of the Piper plant and come in a number of different forms:

Ground pepper quickly loses its aroma and flavour so buy whole peppercorns and grind as required. Most homes have a pepper mill. A pestle and mortar is useful in the kitchen for larger quantities of pepper or other spices. Keep the peppercorns in an airtight container, away from sunlight.

Pepper in the past was so expensive that it wasn’t absorbed into the cookery styles of many countries. Now, however, with easy availability and affordability, more cooks are introducing it.As a general rule, little pepper is involved in Chinese cooking although some traditional recipes call for Sichuan pepper. This is native to Northern China and is unrelated to black pepper, which is sometimes used in its stead although a connoisseur should be able to tell the difference. Sichuan pepper has a characteristic pungent taste followed by a tongue-numbing effect.

In India, its country of origin, pepper is used generously. It’s a constituent of many pastes and curry powders such as garam masala from north India and sambaar podi from the south of the country.

In Thailand it’s the fresh green peppercorns that are most popular. They’re used in stir fries and in curry pastes. Black pepper is also used in some of the mild stews.