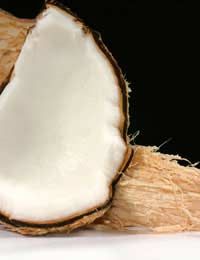 There’s an old saying amongst South Sea islanders: “He who plants a coconut tree plants food and drink vessels and clothing, a home for himself and a heritage for his children.”It’s true that coconuts are incredibly versatile and useful fruits. About one third of the world’s population regard this highly nutritious foodstuff as a staple, important both to diet and economy.

The tall coconut palm tree originated in Southeast Asia, probably in Malaysia. It appears in records from very early history but it wasn’t known in the western world until the 6th century when it was imported into Egypt from India. Early Spanish explorers gave it the name coco (meaning head) because, with its three indentations, it resembled a face. Later on, when shipping and trade was more widespread, coconuts were imported into Britain and sold cheaply – so cheaply that they could be used as targets in coconut shies in fairgrounds.

Today coconuts are cultivated all over the world in tropical regions. Coconut products e.g. milk and oil provide a valuable source of revenue.

The Coconut As The Tree of Life

Claims for the health-giving benefits of the coconut have long been made. In the South Seas the palm is called the Tree of Life and believed to be a cure for everything from baldness to syphilis to flu. It’s only recently that the claims have been scientifically investigated and proved, in some part, to be true. Coconut oil is rich in lauric acid, which is known to have anti-bacterial, anti-fungal and anti-viral properties, and, although high in saturated fat, the fatty acids present in coconut oil do not raise cholesterol levels.

The coconut palm is also a valued source of food. From a simple refreshing drink to an alcoholic beverage to a milk popular for use in curries, the coconut provides it all.Coconut water is drunk straight from the fruit; the coconut flesh is used for thickening sauces; and the oil, pressed from the flesh, is used for frying and in toiletries. The coconut can even provide its own bowl from which to eat or drink, and the husks can be used as fuel for the fire. A multi-purpose creation indeed!

Coconut milk is a vital ingredient in much Asian cookery. In Southern India coconut milk is used, sometimes in conjunction with yoghurt, for many of the dishes. The state of Kerala is particularly renowned for its coconut-flavoured sauces.

The cookery of Sri Lanka is another that makes good use of the coconut. Almost all of its curries call for the inclusion of at least a spoonful of coconut milk. And in Thai cookery, the word, curry, is virtually synonymous for a sauce made from spicy coconut milk.

In Britain we can buy coconut milk in tins or as creamed coconut in blocks. Creamed coconut needs to be dissolved in hot water to the correct consistency (follow instructions on the packet but approximately 200g per half litre of water for a thick milk). Coconut milk powder is also available but because it contains extra chemicals to stop it forming lumps, it tends to be less satisfactory.

Make Your Own Coconut Milk

To make your own coconut milk, first find a coconut. Break it open and grate the coconut flesh into a bowl. Cover with 1 cup of hot, not boiling, water and leave to stand until the water has cooled down. Strain, into another bowl, through a sieve lined with cheesecloth. Squeeze the coconut in the cheesecloth until it’s as dry as possible. Store the coconut milk in the fridge.

The grated coconut still contains most of the fat and flavour so spread it out and leave to dry. Then store in an air-tight container and use for toasting or toppings.